The 10 most popular anime series on Crunchyroll

The wildly popular Hunter X Hunter is a remake of a classic anime that aired in the mid-90s, but it actually follows the original storyline of the manga it’s based on. The main protagonist of the series, Gon, a scruffy-haired teenager who aspires to become a famous hunter and locates his father whom he believed to be dead until very recently. His adventure sees him leave his home, Whale Island, to pursue this business. Along the way, he forges new friendships with a colorful cast of characters such as ex-assassin Killua, and he engages in all sorts of intriguing pastimes like practicing a strange magic known as Nen, beating a game of virtual reality with real life. pious, and fight giant man-eating ants. It’s a tale full of variety and unpredictability that will keep you guessing until the end of its more than 140 episodes.

One of the most talked about anime series in recent years, My Hero Academia is packed with fantastic action and a heartwarming narrative brought to life by a cast of memorable and relatable characters.

The story centers on Deku, a teenager who dreams of becoming a superhero but unfortunately finds himself one of the only children of his generation born without a superpower. Yet, after being chosen by the world’s most powerful superhero, All Might, he manages to make his way to UA High School, a school for heroes, in hopes of turning his dream into a reality. And it’s his underdog status that instantly makes Deku such a likeable character, and watching his quest to achieve those lofty goals unfold is so entertaining.

There have been around 430 reviews for the series on Crunchyroll, including over 380 5/5s.

Naruto Shippuden first aired in 2007, and while it might be old hat, it’s still one of the most popular series on Crunchyroll. Shippuden appeals to a more mature audience than the original Naruto series (still wildly popular, itself) with its darker plot, and the series’ iconic characters are caught up in much more emotionally poignant stories now that they’ve all grown up. You should expect even more intense fight scenes presented in a sleek animation style that looks great. Overall, Shippuden builds on the foundation left by the original series and improves in every way.

Be warned, there are quite a few filler episodes scattered between each major plot point, but overall this is a great anime series that you shouldn’t miss.

Gintama isn’t the serious samurai adventure it might first look like. Oh no. If anything, it’s one of the most hilarious alternate history sci-fi tales you can watch. In Gintama, it was the aliens and not the Americans who forced isolationist Japan to open up, which sets things in motion for a really bizarre alternate history where Tokyo is still known as Edo, the aliens walk freely on the streets and futuristic technology augmented human life in the 1800s.

Where Naruto Shippuden sometimes devolves into boring filler episodes, Gintama is streamlined into short, intense story arcs, articulated by bad-ass fight scenes and more than a dash of outlandish humor.

Bleach is an interesting albeit quirky adaptation of a Japanese manga series. The story follows a 15-year-old Japanese high school student named Ichigo Kurosaki who has the ability to interact with ghosts, which later sees him used as a substitute Soul Reaper (someone who sends good and bad souls to their last resting place). The series is filled with drama, intense battles, and plenty of lighthearted moments scattered across its 366 episodes, which helps round out a great cast of characters.

The animation style is eye-catching, and the sword fight scenes are particularly dazzling with well-choreographed battles and spectacular moves. In general, the style is fluid, and the studio has done a great job of bringing Tite Kubo’s manga series to life. 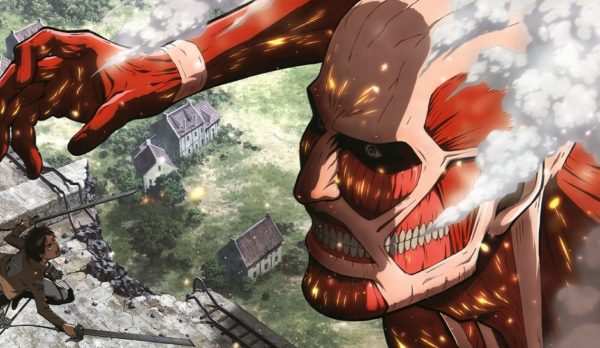 Attack on Titan is quickly earning a reputation as the definitive animated series of the decade. It’s definitely one of the most universally popular, reaching beyond anime fanatics and attracting a huge following. The premise is unique and gripping, and the antagonists both awe-inspiring and downright creepy. It’s one anime series you won’t want to miss, and it’s especially great for those new to the genre.

The story follows Eren Yeager, a young warrior who swears to cleanse the earth of giant humanoid Titans. These giants are usually several stories tall, have very little intelligence, and devour human beings for fun. However, there’s more to Eren’s motivation than valiantly resisting the threat; for him, it’s personal. As the walls of his city crumbled under the weight of a Titan attack, he and his sister witnessed their mother being torn apart by the juggernauts. And so begins a gripping tale of revenge filled with drama and spectacular action.

JoJo’s Bizarre Adventure is a manga that has been circulating since 1987 and continues to be one of the most popular in Japan. Now it’s got the anime adaptation it’s always deserved with a brilliant series winning accolades from Crunchyroll users. The first two parts, Phantom Blood and Battle Tendency, were made up of a series of 26 episodes which constituted the first season and now the third part, Stardust Crusaders, has also started airing.

The premise of the story is simple, following the trials and tribulations of the Joestar family as they battle evil across different generations. Everything is very faithful to the original source material, and the art style will also appeal to all fans of the original anime. Except here it really pops with vibrant visuals bursting from the screen.

Assassination Classroom is the story of a class of third-grade middle schoolers who have earned a sad reputation as the losers of their school by a social hierarchy cultivated by its main villain. These children are mocked and belittled by the other students, hiding in a small cabin on a mountain far from the main campus. Additionally, they have been tasked with assassinating a giant sprawling “teacher” who threatens to destroy the world.

If that sounds more than a little strange, that’s because it is. But it’s also a hilarious, absurdly clever, and completely unique premise for an anime. Assassination Classroom is a good time, and its crazy story is complemented by great artistic and production values.

Kuroko’s Basketball is a great sports anime that will entertain with epic sports scenes, a likable cast of characters, and cleverly written comic lines. While it helps to know a little about the sport, you’ll quickly pick things up even if you’re a newcomer, and the action is so entertaining it’s worth watching regardless.

The plot follows Taiga Kagami, a promising young basketball player returning from the United States, and Tetsuya Kuroko, a seemingly ordinary college student whose lack of presence allows him to move about unnoticed. Tetsuya was previously a member of the famous Teikou Junior High School basketball team, which was crowned champion three years in a row thanks to five outstanding players. Known as “The Generation of Miracles”, they dazzled their opponents with their incredible skills, but their ways went their separate ways after the team disbanded.

Tetsuya, known as “Phantom Sixth Man”, was a member of this team. Although he was neither athletic nor able to score points, he moved discreetly on the field to help the most talented players. Now he teams up with Taiga on a quest to become Japan’s top high school team by winning the Interhigh Championship. To achieve their goal, they must cross paths with powerful teams and Tetsuya’s former teammates.

Jump Beat! is the story of young Kyoko Mogami, a melancholic but optimistic sixteen-year-old girl who loves her childhood friend, Shotaro, but is cruelly betrayed and therefore seeks revenge on him. Kyouko must be one of the best shoujo heroines to appear in a long time. Switch between the innocent and caring type and a vindictive and bitter monster in a jiffy! But you’ll soon love her crazy mood swings and diverse personalities because, beyond just being hilarious, she’s a strong heroine who shows a lot of depth and determination in achieving her goals.

Jump Beat! is the kind of animated experience that will make you smile, even if you weren’t 100% sure it would be your cup of tea. It’s lighthearted, but its most poignant moments are relatable and heartfelt. Even a few minor issues with sometimes shoddy animation and some pacing inconsistencies with its plot can’t spoil what is a very enjoyable sight.

Eight new anime shows to check out this summer