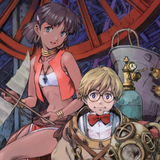 Distributor of movies and anime GKIDS is on a roll this year following the success of BEAUTIFUL and his recent announcements surroundings PANDA! GO PANDA! Now the company is looking to take it a step further by being the brand dedicated to bringing the best in anime by announcing the acquisition of the NADIA: THE SECRET OF BLUE WATER 1990 TV anime.

It’s 1889 and people from all over the world are flocking to Paris to see the scientific achievements of the Universal Exhibition despite rumors of dangers lurking in the oceans. While attending the fair, teenage inventor Jean meets Nadia, a mysterious girl who possesses a highly sought-after crystal called Blue Water. Pursued by nefarious forces, the pair travel by sea and sky to escape their would-be captors and uncover the secret of the crystal.

More release details are expected in the future, with initial confirmation that the series will hit home video and select digital platforms later this year.

Why 2022 could be a big year for seinen anime series