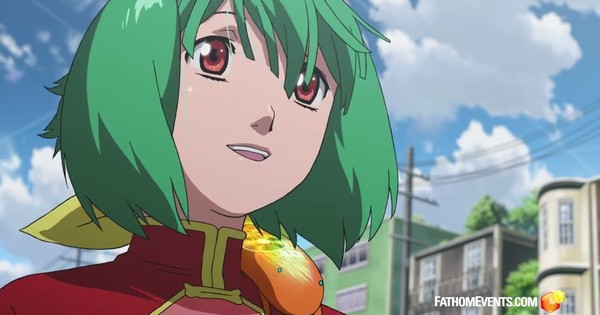 We are in the year 2059. Following the near destruction of the human race 50 years ago, humanity embarked on an interstellar emigration project.

The Macross Frontier fleet is on its way to the center of the galaxy when it encounters a hostile alien species known as the Vajra. A concert by touring popstar Sheryl Nome becomes ground zero for an attack where flight school intern Alto Saotome and budding singer Ranka Lee are caught up in the chaos.

Shocked by the experience, Alto decides to join a private military contractor, Strategic Military Services (SMS) to protect his friends and soon finds himself piloting the latest state-of-the-art variable fighter, the VF-25 Messiah. All the while, with encouragement from Viola and Sheryl, Ranka begins the rigorous pursuit of becoming an idol singer.

As a budding love triangle begins to bloom between the three, suspicions are raised as to the Vajra’s real purpose and who is really behind the attacks. When Sheryl learns that her home, the Macross Galaxy fleet, has been attacked, she calls the SMS into action and Macross Frontier becomes the scene of an epic showdown!

In the aftermath of the events of The False Songstress, Sheryl Nome remains aboard the Macross Frontier as her health begins to rapidly deteriorate. Meanwhile, Ranka Lee has become a singing sensation in her own right and is preparing for her first gig just as a joint military operation to hunt down Queen Vajra begins.

After losing his variable fighter VF-25 as a result of the skirmish, Alto Saotome is hospitalized and the two singers rush to his side. As their love triangle is about to reach its climax, the architects of the Vajra attacks are uncovered and Sheryl finds herself behind bars, accused of treason.

It’s now a race against time for Ranka and the Strategic Military Services (SMS) to save their friend and stop the true conspirators controlling the Vajra, while trying to protect their alien homeworld. The culminating finale of emotions, music and mecha the action comes to a close as Alto faces one of the most important choices of his life.

Fathom Events organized a one-day screening for Macross Plus Movie Edition movie in US theaters with English subtitles on December 14.